Whilst wearing the VR headset drivers are seated in a custom-built motion seat that reacts in realtime to events in the footage. To feel fully immersed in the driving scenario, drivers are also provided with a responsive steering wheel and foot pedals to provide a natural, realistic test environment.

Whilst the driver is completing their assessment, trainers monitor their performance in realtime via a display which broadcasts the footage in the headset.

Eye-tracking technology allows trainers to monitor how quickly a driver has noticed a developing harzard. On-screen markers overlay the footage to indicate whether a driver has racted to hazards within the appropriate time.

Once the assessment is complete, trainers and drivers can replay the footage together to help them understand where improvements may need to be made.

Linde are a multinational chemicals company, headquartered in Guildford, Surrey. Operating several businesses around the globe, they serve customers in healthcare, manufacturing, and aerospace. Logistics is core to their business, with their international operations underpinned by a broad network of haulier and road freight services.

Our relationship began when Linde approached Diverse Interactive with an initial interest in our VR capabilities and how that can be applied to their driver training programme. Their solution at the time was not cost or time effective and required drivers to take a day away from their work. More so, the experience was not engaging and didn’t leave a lasting impression on trainees.

With driver training and safety being an important focus throughout Linde’s network, the solution needed to be interactive and memorable, yet cost effective and scalable. Working with Linde’s internal R&D teams, we built a proof of concept that demonstrated a virtual solution based on a high-quality video experience, and immersive VR tech.

With a positive reaction from the direct team, Linde were able to present the concept to the wider business and unlock the resources and funding needed to enter development. We began work on a fully bespoke driver experience solution that utilised the HTC Vive headset and a bespoke motion seat. This provided the underpinning of what became a highly technical and reliable product, focused on creating a realistic environment for the driver, an accurate and repeatable experience for the trainer. 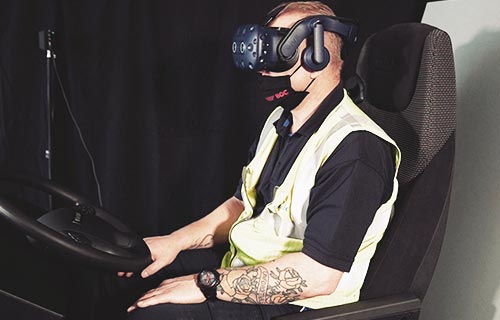 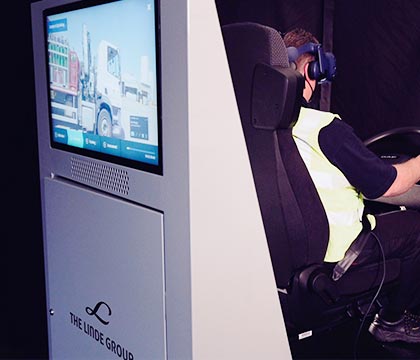 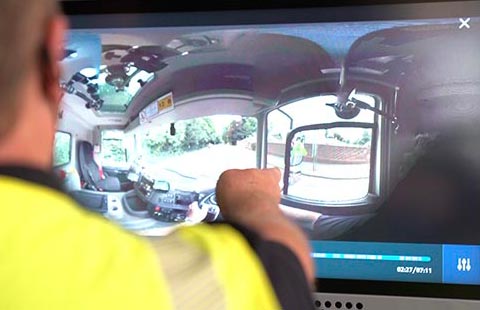 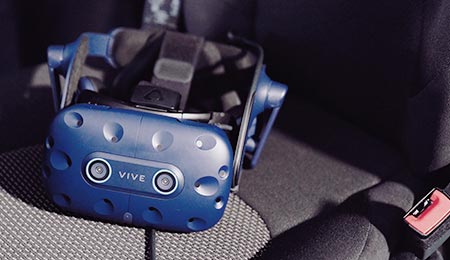 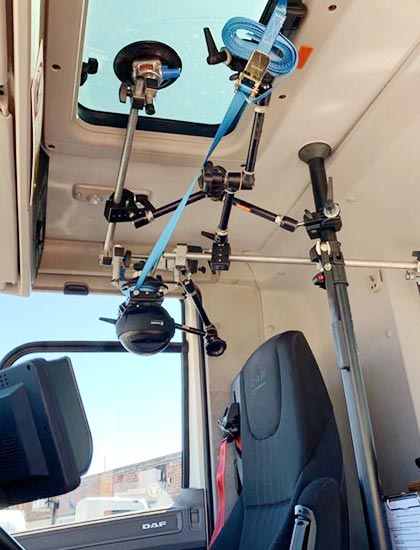 Our goal was to create a virtual training solution as close to reality as possible. To do this we used a number of high-performance devices to capture the necessary footage. Using six InstaPro 360 cameras, we were able to shoot scenes in staggering detail, capturing video in 8k and 60 frames per second. This setup allowed us to film at a high shutter speed to eliminate motion blur, and to capture content not only in high resolution for detail, but also with a high dynamic range, so that bright elements outside of the cab and the darker internal environment wouldn’t contrast one another in the final experience.

Video wasn’t the only area where we required vast amounts of detail. For the driver to feel like they were at the wheel of a real truck, we captured vast amounts of telemetry. This included accelerometer data from the seat, so that corners, accelerating and decelerating felt realistic, and also data from various fixed points in the cab, so that body roll could be accurately translated into virtual body roll in the motion seat. But the data capture didn’t end there. Eye-tracking played a huge part in the training, allowing the trainee and the trainer to review the session and assess where the driver has been looking throughout the test.

All of this data combined provides a vastly more accurate picture of the driver’s abilities to spot hazards and when necessary, react to them. Fully tailored software design ensured that the UI of the trainer’s app is easy to use, breaking down all of this complex data in a way that is digestible and actionable.

This project, named DIViRT (Driver Immersive Virtual Reality Training), not only delivered an exciting solution to the business, which improved driver’s engagement and enthusiasm for the training, but also cut costs, down-time and travel for drivers, proving itself to be a training solution with longevity and a future roadmap.

Our ongoing technology partnership with Linde, combined with our sensible and safe response to the restrictions put in place by COVID-19, has demonstrated our strategic approach to big briefs where engagement, cost effectiveness and future proofing is key. 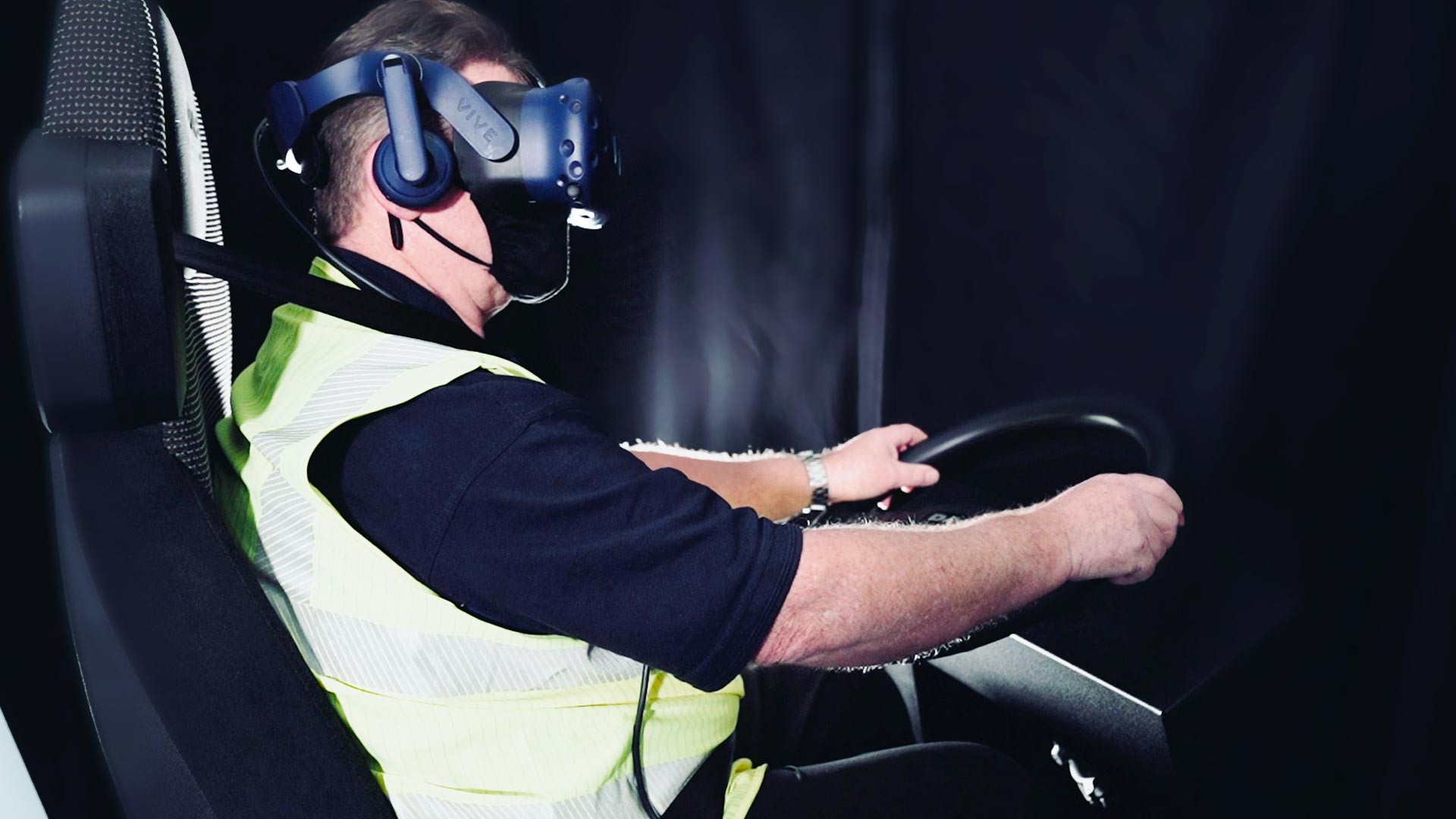 "We have recently completed a VR project with Diverse Interactive which has taken us on journey from the start of practically understanding and demystifying how we can use VR and potentially make a step change in our business.

Talk to our team and discover how we can bring your unique brief to life.